Landing a Piper J-3 Cub on top of a moving ambulance may not sound like an exercise in flight safety. However, Eric Tucker insists that’s exactly what it is. “There’s no such thing as safe flying, just like there’s no such thing as safely walking across the street,” says the 36 year-old father of two, adding that his great grandfather was killed by a bus while doing exactly that. “The objective is to mitigate it down to an acceptable level of safety.”

Sunny yellow, with a classic black lightning bolt and teddy bear logo, the Piper Cub almost looks like a toy airplane. Other than an air-cooled piston engine driving a fixed-pitch propeller, there’s not much to it: no starter, no electrical system, no battery, and no radio. The entire aircraft weighs in at only 770 pounds—less than the record for deadlifting.

A lightweight plane is a give-in, when the objective is to land it on a car, but why an ambulance? “Because I’m an optimist,” Tucker jokes. “If I was a pessimist I would have bought a hearse.” Seriously though, he attributes the choice of vehicle to his wife, Jillian, who refused to take part in anything involving a Winnebago. However, she could get on board with the ambulance, which has the curb appeal of the vehicle used in Ghostbusters. In preparation for the stunt, the roof is outfitted with a landing pad: a steel rack and wooden platform that Tucker designed himself.

The son of airshow legend Sean D. Tucker, Eric grew up amidst modern day barnstormers. He attributes the origins of the car top landing stunt to mentor Jimmy Mynning, who introduced 12-year-old Eric to “the wacky side of flying.” Tucker remembers watching while Mynning popped out of the skylight of his Super Cub dressed up as an old woman, pretending that the plane was out of control while steering with his feet. “The ultimate goal wasn’t necessarily to teach me how to be a comedy act airshow pilot, but to use barnstorming as a metaphor for becoming a better stick and rudder pilot,” he says. “You have to figure out how to maneuver the airplane in three dimensional flight, and really understand how you can trade airspeed for altitude. It instills these really core skills that are totally lost among modern pilots.”

Other exercises from Tucker’s aviation education include: throwing rolls of toilet paper out the window and trying to cut them as they unfurl; flying straight down the length of the runway with the wingtip of the Cub exactly 2 feet off the pavement; soloing gliders at 14; soloing the family Pitts Special at 16; float planes; aerobatic competition; formation aerobatics; and, wingman to an emergency landing on the 101 Freeway in King City. “There’s no substitute for experience,” he says. 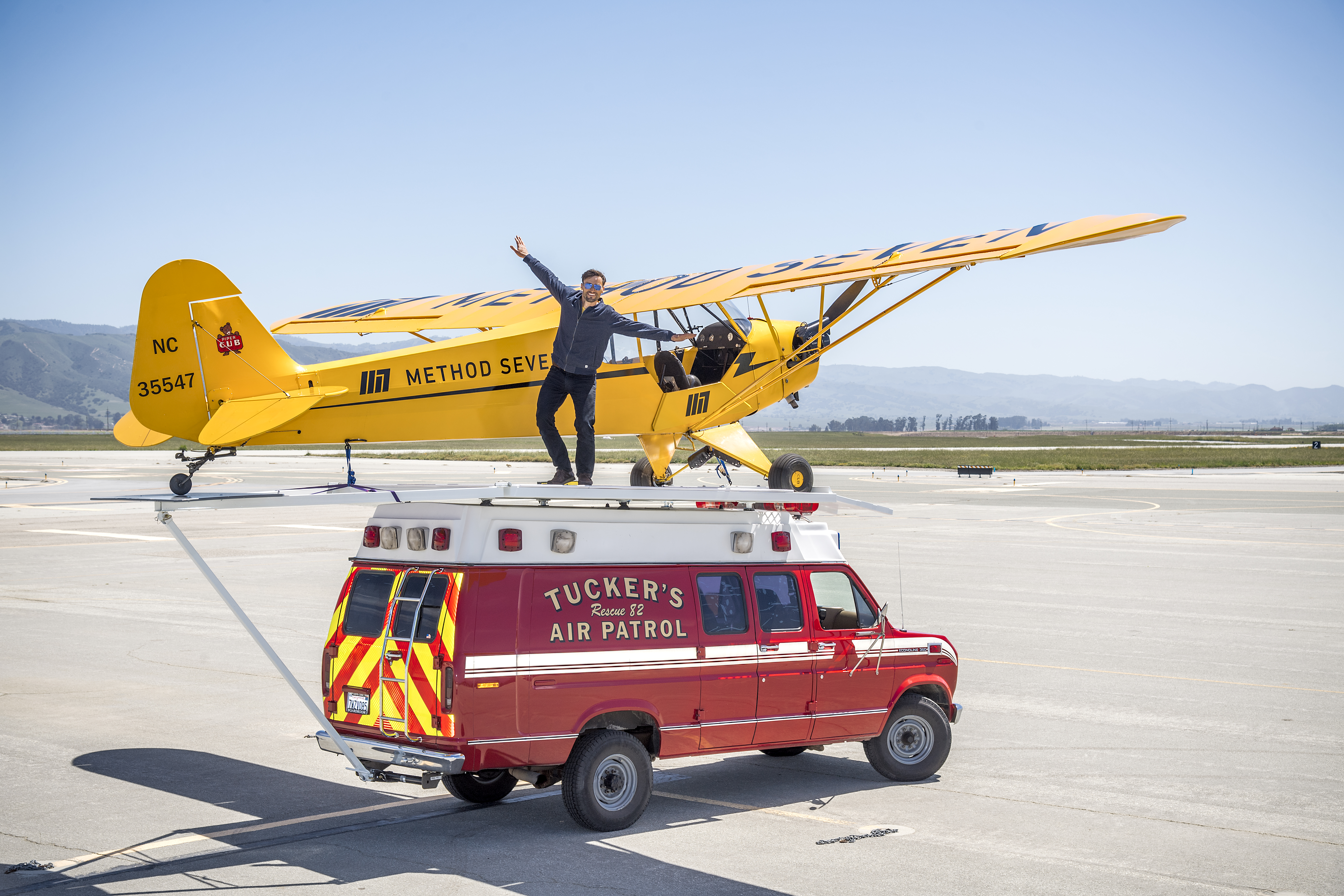 Though his current gig as a corporate pilot in a Falcon 900LX for Solairus Aviation is “a more proscribed kind of flying,” Tucker insists that barnstorming skills have equipped him to deal with anything he might encounter in the air. “The biggest weakness within corporate aviation flight training is in cultivating and maintaining stick and rudder flying skills,” he says. Indeed, the Air France and Air Malaysia catastrophes were both the result of stalls, the most basic kind of aerodynamic upset. NBAA announced that between 2001 and 2011, over 40% of fixed wing GA fatal accidents occurred because pilots lost control of their airplanes.

Tucker recalls an adage uttered by his mentor, Bob Hoover: “You gotta fly the airplane as far into the wreck as you can.” Staying dedicated to controlling the airplane during equipment malfunction will almost always equate to survival, Tucker claims. He scrolls through the pictures on his phone to an image of a Piper Cub about 30 feet off of the ground, suspended in the branches of a tree. He has an entire gallery of such pictures, prompted by a conversation with the owner of a backcountry airport. As Tucker surveyed the dense woods surrounding the airport, he casually asked the owner: “What’s your tree landing strategy?” The guy wordlessly turned the color of a contrail. Tucker assembled a montage of tree landing photos to illustrate an important point: landing a plane in a tree doesn’t necessarily mean you’re going to die—but it probably means you’ll need a rope. 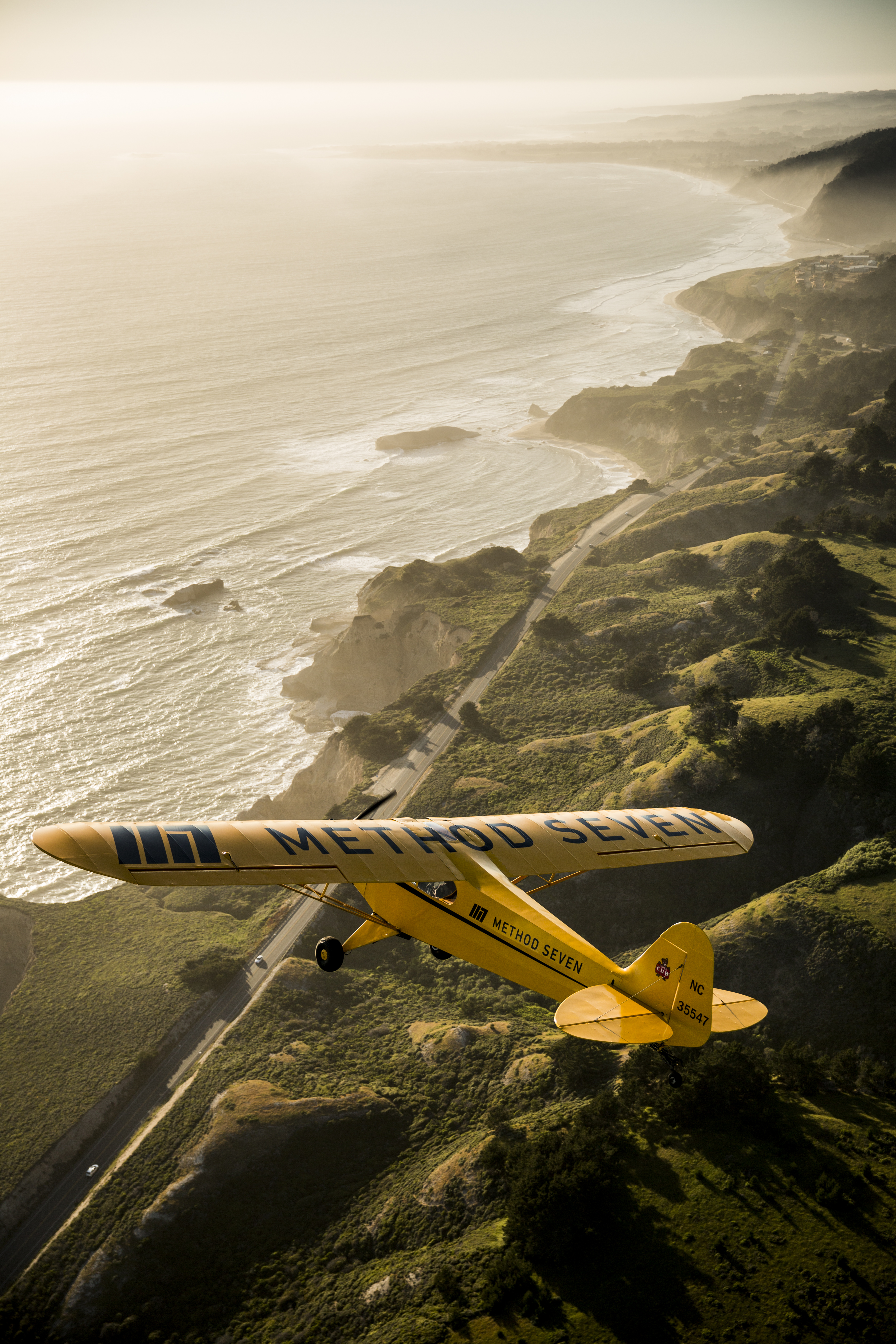 For the car top landing stunt, which will take place in the tree-free zone of Salinas Airport, Tucker’s arsenal of equipment is limited to helmet, parachute, and sunglasses. “A lot of pilots take their glasses off for landing because they don’t get enough visual acuity, due to them not being clear enough or light enough to provide the sort of subtle peripheral vision that you need,” Tucker notes. He prefers Method Seven SKY 18, a mid-spectrum lens that provides enough clarity to wear throughout all phases of flight.

There’s little room for error when landing a plane on top of a moving ambulance - 8 inches to either side of the target to be exact. In a worst-case scenario, Tucker imagines that he could get hit with a gust of wind, and come off the side of the ambulance. “The general consensus is: it’s a really hard way to die or get seriously injured, but it’s probably a pretty easy way to bang up an airplane.”

For Tucker, the ultimate goal of the car top landing stunt is not to cheat death. It’s to stretch his capacity for mental focus and precision flight in a high-workload environment. It’s an exploration of what it means to be an aviator, and another step in the lifelong pursuit of skill building. Ultimately, it’s a way to maintain the kinesthetic feel for a flying machine that will help Tucker safely deliver his Falcon 900 passengers to the far corners of the globe.