Meet Bleezy and Old E, award-winning cannabis cultivators, musicians, and Method Seven ambassadors on a mission to bring the cannabis industry back to its roots.

In 2007, the two brothers from the Emerald Triangle in Northern California started making music and growing their first cannabis plants in their backyard as hobbies. Today, Daniel and Bryan Eatmon, aka Old E and Bleezy, have become recognized purveyors of cannabis culture—famed for both their musical talents and signature style of sun-growing cannabis plants so massive that they often reach 10ft or more in height. 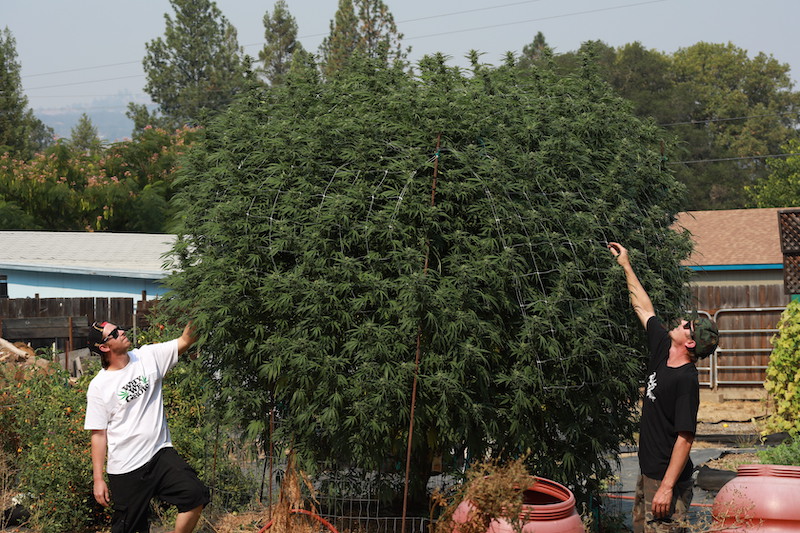 Bleezy and Old E are the founders of Mendo Dope Family Farms, a licensed cannabis farm that the duo operates in partnership with the iconic team at Greenshock Farms, where together they cultivate 100% organic outdoor sun-grown cannabis that is sold throughout retail dispensaries across California. Since 2015, they have won a dozen awards for the outstanding quality of their signature sun-grown cannabis.

The band formed by the two brothers also shares the name Mendo Dope. Over the years, Mendo Dope has built a reputable brand known for its artistry, integrity, and dedication to creating clean medicine, as well as music and media for the culture that doubles as educational content to teach horticulturists about how to yield quality naturally sun-grown cannabis that’s completely chemical-free. Content for growers includes original web series, DVDs, and live studio albums recorded right on their cannabis garden with a full band.

On 4/20/21, Mendo Dope dropped their latest album, Live in the Gardens Season 4, and released a new DVD: How to Grow Mendo Dope Volume 2, the No-Till Revolution. Recently, they premiered season three of their web series the Green Dope Project, and are currently filming season four. ‘‘Every year we‘ve been upgrading equipment and learning more about the whole film process, and just having fun with it to bring some cool content for the whole culture, and really just teach people how to grow organic, clean, and teamed up with nature,’’ says Old E.

What Makes Their Signature Style of Sun-Grown Cannabis So Distinct and Unique?

Mendo Dope uses no-till farming techniques such as constantly adding dry amendments to the top of the soil so they don’t disturb the life underneath, as well as putting worms and beneficial bugs in the garden to maintain plant health, reduce problems, and keep the soil at its peak. How does this impact the quality of their plants? ‘‘Growing it pure, organic, and clean like we do, you can really taste the difference of it, there’s just such a real clean, smooth taste to it that brings out the real essence of the flowers,’’ emphasizes Old E.

As experienced cultivators, Bleezy and Old E also have a small personal indoor grow. ‘‘It’s cool to see flavors and see how the strains act inside,” says Old E. “But to us, sun-grown is the ultimate and best way to really grow cannabis and show the potential of what this flower is and how amazing it is. You can pump up strains to get really chunky, heavy buds by doing that but growing organically we’ve shown that our exact style of how we grow can create some of the biggest trees that people have ever seen.”

This clean, no-till style of farming is completely sun-grown, as opposed to cultivated indoors underneath harsh artificial grow lights or with chemical boosters and other additives designed to ward off potential pests and other threats to plants. However, it still presents its own set of challenges. The intense UV rays of the sun pose a serious threat to both your eyesight and the health of your plants.

‘‘Some days the sun is super bright and crazy on the eyes, especially last year during the fires,” explains Old E. “With the smoke in the air, it does a trippy thing with the light where it’s sort of like a brightening effect, and it kind of takes away the true color of what you’re seeing as the actual plant. You can also miss things like russet mites when it starts to yellow out a little bit from the inside of the plant, and sometimes you don’t really see that happen until it’s almost like oh wow ok it’s starting to get real bad.”

This is precisely why the Mendo Dope crew turns to Method Seven outdoor grow glasses. ‘‘With the glasses, you’re keeping that nice true color and you’re able to see any kind of stresses or deficiencies with the plant a lot easier than just being under that harsh direct light. It definitely helps to get the perfect view of things,’’ explains Old E.

Bleezy and Old E were first introduced to Method Seven by a friend who showed them a pair of glasses in action in the grow room. The brothers quickly became Method Seven’s initial ambassadors and key collaborators. In 2018, Mendo Dope partnered with M7 to release their first pair of custom limited edition Mendo Dope Camo Evolution grow glasses, offered in both HPS+ (indoor) and SUN polarized (outdoor).

Now, three years later, Method Seven and Mendo Dope have teamed up once again to drop a new limited edition model of rare, custom frames—featuring a classic, camouflage design in forest green, sand, and cedar in a matte finish for those who want to blend in and stand out.

According to Old E, ‘‘as soon as you wear them and get a feel for them and actually see what it is they do, there’s really no going back.”