From street artist to celebrated muralist, Taylor Reinhold exudes color and vibrance in his work. He’s one of those guys with a big smile who runs into a friend everywhere he goes. Once you know Reinhold, you start to see him—or at least his art—everywhere. His murals are landmarks in his native town of Santa Cruz, CA: at Kind Peoples Collective cannabis dispensary, along the iconic Highway 1, and in front of City Hall. It may come as a surprise that Reinhold is legally blind. He collaborates with Method Seven in bringing prescription lens technology to growers who have compromised sight—and inspired vision.

Growing up on the California Coast between Santa Cruz and Humboldt counties, Reinhold found his footing in the intersection of cannabis and local art. In 2009, he bought a silk screen press and founded Made Fresh Crew (MFC), a collective for like-minded artists. On a trip to France, Reinhold noted that street art influenced culture, and experienced a revelation: It’s ok to paint walls. Through MFC, he taught himself to advocate for himself and fellow artists. He realized that art should not only be valued; artists should also be paid. His first painting commission was for Method Seven: an event backdrop memorialized on the colorful pouch encasing your grow glasses! 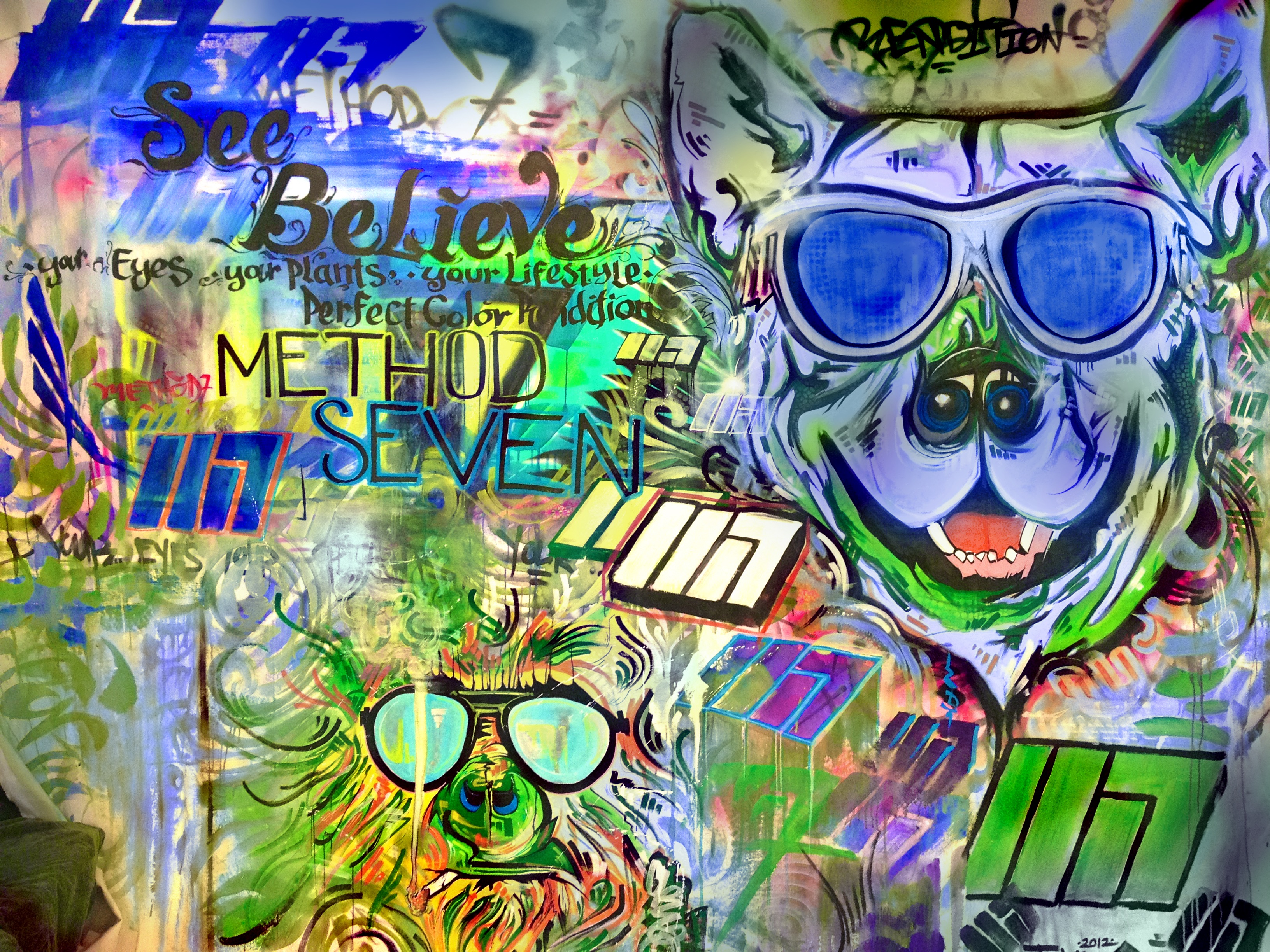 These days, Reinhold is busier than ever, as his walls and ambitions grow alongside his name. He has defined creative for well-loved cannabis brands like Fire Cut and LemonTree, and is a master of street style. Aside from his own clothing line with MFC, he designs for the cannabis farming apparel company, Farmers Armour, bringing Santa Cruz flair to the technical protective gear in their new Art Collection. While painting murals on-site in dispensaries and vending at music festivals with MFC, Reinhold realized how art helps establish the identity of a community. As he creates murals in Santa Cruz, cars offer praiseful honks and curious neighbors mosey over to monitor progress. Reinhold engages with all of them. Public art contributes to the community experience; it’s an opportunity to start a meaningful conversation. 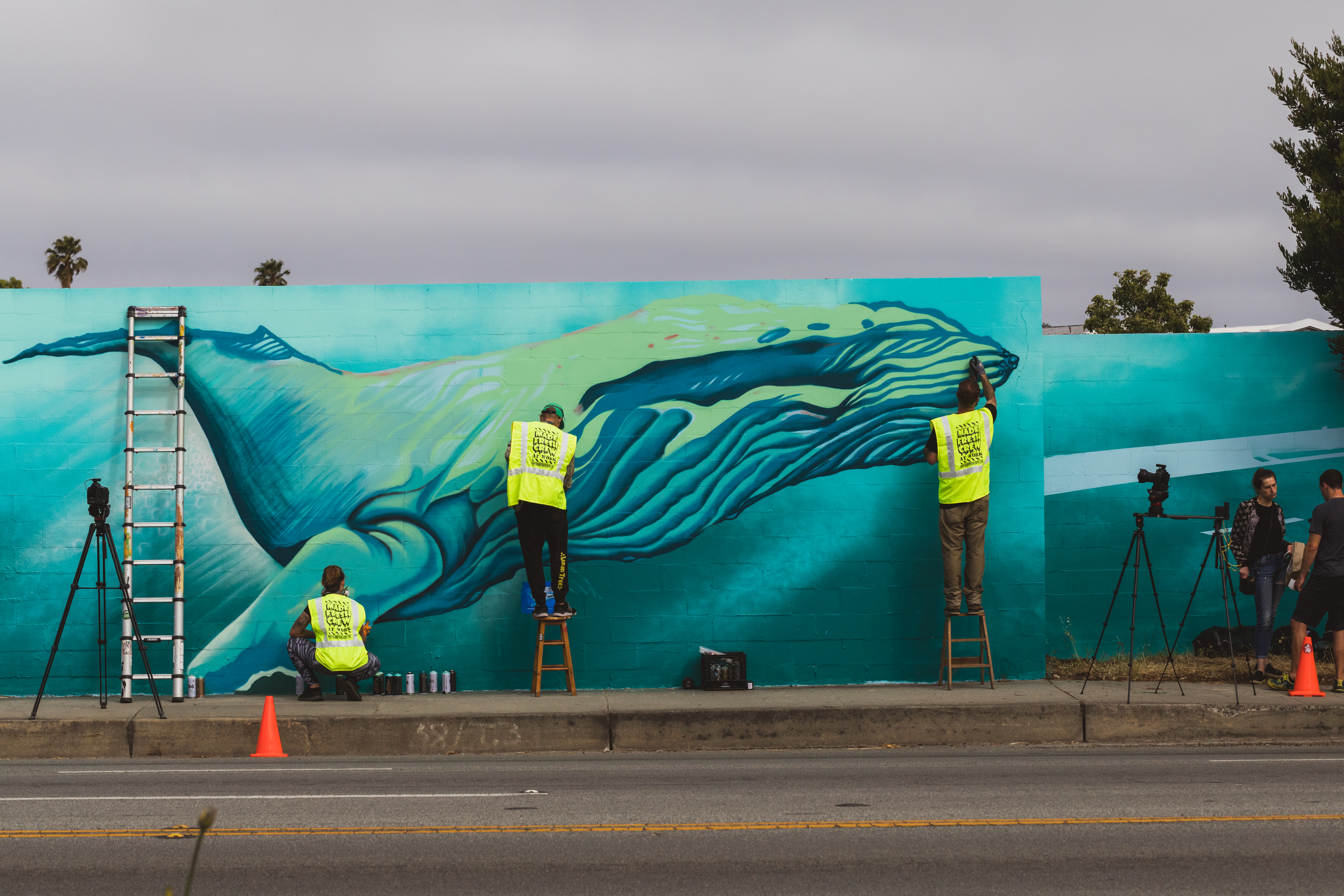 Reinhold’s current projects spotlight some of the most important conversations of today, including social justice and environmental stewardship. This past summer, he organized a public event, during which attendees physically painted a Black Lives Matter mural in front of City Hall. The mural will be communally repainted annually for the next 10 years. Reinhold’s first large scale community project was the Clean Oceans mural on Highway 1. It is the largest mural in the county and marks a turn toward ARTivism — using art and storytelling to create meaningful change. Working with PangeaSeed Foundation, Reinhold started Sea Walls: Artists for Oceans, an organization that drives ocean stewardship through art. Prepared by lessons learned with MFC, Reinhold finds himself uniquely qualified to rally the resources (and patience) necessary to overcome bureaucratic obstacles and reclaim forgotten walls with community art and discourse. Despite the weight his messages carry, you’ll never feel burdened in front of his work. Reinhold’s style and use of color create a sense of euphoria and wonder, as well as hope in the power of community consciousness.

Reinhold has big plans for 2021 and beyond. He dreams of creating an Art District with affordable studio space and walls available for budding street artists to practice on. In addition to ongoing projects such as the Sea Walls and BLM mural, he continues to maintain deep roots in the cannabis community. Reinhold is currently helping Method Seven refine prescription grow room glasses for higher strength prescriptions, and designing colorful new cannabis farming apparel with our pals at Farmers Armour.

From October 15-30, 2020, enter to win the ultimate prize pack for growers with #visionaboveall. Method Seven and Farmers Armour are teaming up to showcase a collection of Reinhold’s art in honor of Vision Awareness Month. We’re giving away a pair of Method Seven Prescription HPS Grow Glasses (a $400 value), plus Farmers Armour Sleeves, Straw Hat, and Gator, featuring designs from visionary Taylor Reinhold. The contest opens on October 15 and the winner will be announced on October 30. Enter at https://methodseven.com/giveaway/.