According to the Federal Aviation Administration, “vision is a pilot’s most important sense.” In addition to natural factors such as daylight and cloud cover, a pilot’s lenses also affect vision during flight. Though blue blocker sunglasses provide warm color and contrast, a recent study indicates that they may affect peripheral vision.

The retina of the eye contains two types of photoreceptors that detect visible light. Cones are tightly concentrated near the center of the retina, allowing for sharp focus and color recognition during normal daylight conditions. Rods are distributed throughout the periphery of the retina, and allow for peripheral vision in dim or dark light. A typical human eye contains about 100 million rods and 7 million cones.

Most of our vision comes from cones during well-lit daylight conditions; this is called photopic vision. Scotopic vision, which occurs in low-light, happens entirely through rod cells. During intermediate or transitional lighting conditions such as sunrise, sunset, or overcast skies, rod cells and cone cells work together to enable mesopic vision.

The scotopic/photopic ratio, or S/P ratio, measures how much visual light transmission is useful to the human eye. In nature, the S/P ratio is close to 1.4 during sunrise and sunset. A value above 1.0 is considered optimal, while a value below 1.0 compromises peripheral vision. Blue blocker lenses lower the S/P ratio by limiting the amount of light in the 400-500nm blue spectrum that reaches the eye.

Light conditions with a high S/P ratio simultaneously activate rod and cone cells, allowing for maximum absorption of visual information. This becomes especially critical during takeoff and landing, when sharp focus and peripheral vision are both required. According to Boeing statistical studies published in 2014, nearly half of all fatal accidents in flight occur during takeoff and landing,

“If you’re focusing straight out at the runway, you don’t have much awareness of how high you are,” says Eric Tucker, a corporate pilot with a background in aerobatics. “The information on the sides of the runway tells you your rate of closure with the ground.” Tucker is more aware of peripheral vision than most pilots—he relies on it entirely when landing tail draggers, since he can’t see over the nose of the plane.

Peripheral vision extends to about 135 degrees around the line of sight, enabling detection of outlying shapes and movement. This type of vision is the work of the rods, which are considerably more sensitive to light than cones. During bright daylight conditions, rods are saturated and non-functional. Rods are most sensitive to wavelengths of light around 498 nm, which fall in the blue spectrum of light.

Barry Shiller, Chief Technology Officer for Method Seven, is studying the relationship between blue light and peripheral vision. “The key thing pilots tell us is that they don’t need to remove our lenses during takeoff and landing,” Shiller says.

Method Seven products utilize a technology called notch filtering, which allows for exceptional color contrast without diminishing the S/P ratio. The SKY lens product line has a S/P ratio of 1.0-1.4, depending on the visual light transmission rating.

In conjunction with engineering students at San Francisco State University, Shiller developed a test to measure response to blue light stimulus in the peripheral vision field. The students programmed a micro controller to drive blue lights in a random manner around an arc spanning 90 degrees to the right and 90 degrees to the left in the field of view. Participants pressed a button when they saw one of the blue lights energize. A total of 60 participants were individually tested wearing blue blocker sunglasses and Method Seven SKY 18 lenses.

Shiller says the findings validate the relationship between the S/P ratio and peripheral vision. He plans to continue testing under outside lighting conditions, and across a wider range of participants. 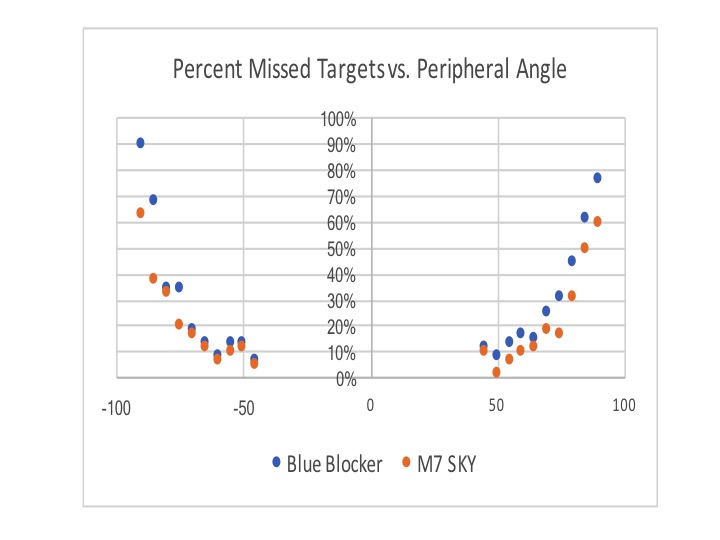